A quality and classy show which always takes the audience by surprise. An extraordinary act which will entertain and thrill you until the end. Precise choreographed routines and authentic replica of costumes will make you believe you are watching the real deal. Ideal for corporate functions and events: floor shows, product launches, theme parties, conferences, outdoor concerts & events and MJ fans

“We received hundreds of videos, TJ was so good, such a dead ringer. We couldn’t go past him and the prize couldn’t go to a bigger fan”. Richard Wilkins, Channel 9

A captivating and thrilling dance extravaganza!  The King of Pop – Starring TJ’ is a spell binding dance tribute to the most exciting performer of all time, Michael Jackson.

This theatrical and music experience prides itself on its production and lighting which brings the ultimate concert experience.

The King of Pop Dance Tribute Show is of international standard. Backed by a team of professional dancers, performances such as:

Billie Jean, The Way You Make Me Feel, Beat It, Bad, Smooth Criminal, Thriller and many more, will have you mesmerized as TJ leads you on a memorable journey as he portrays the King of Pop himself!

The Show includes up to 6 amazing dancers and together with TJ, they create and deliver the most highly energetic and exciting show which you will never forget. Show can be specially tailored to meet your needs. 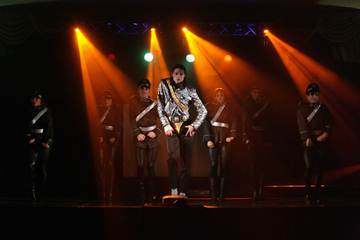 "TJ, you are an absolute freak - in a good way. You were insane! I've seen an MJ Impersonator in London, he was good, but you are sensational. I will be telling my good friend Kenny Ortega ('This Is It' Director/Producer/Choreographer) about you. You and your crew blew the roof off."
Craig McLachlan, Singer, Actor Entertainer
"I just want to say a BIG BIG THANK YOU!! Tj was insane!! As soon as i heard the intro music i was shaking. It was the highlight of my night. The performance was as close to real as i could ask for. I still wear a smile on my face just thinking and talking about it. UNBELIEVABLE!! My party was a night i will never forget!! "
Megan 21st Bday
"We were very surprised and impressed and so were our guests. "Michael" (TJ) was the favourite birthday present. Our family have been big Michael Jackson fans for many years and we have spent many a day studying and copying his moves and my brother found TJ to be a perfect replica from his kicks down to the position of his fingers. We will be telling people of his talent and recommending him to anyone in need of an excellent performer."
Kylie, Birthday
"Disturbingly convincing, I'm a big fan, you have absolutely nailed the routine. You could pass for the real thing. "
The Lido Cabaret Theatre Restaurant
"I want to thank TJ and the INCREDIBLE DANCERS for making our wedding so special. I heard about one of the dancers who got sick and was in hospital but the fact that she still managed to perform was incredible and very touching. Please thank her heaps for me. TJ and the group were absolutely mind blowingly entertaining.There were guests who remarked that they felt like, it was Michael Jackson performing on stage. When Paulina and I had time to reflect on the wedding, we were very emotional about TJ’S performance and once we get the video, we will be reliving it for the rest of our lives. I am so glad we hired the best and as TJ mentioned in his speech, we want to keep Michael Jackson alive in our hearts and TJ is making sure that happens with his performance. TJ will forever hold a special place in our hearts and I hope he keeps performing for a very long time."
Ajay and Paulina, Wedding (Sydney)
Facebook-square Instagram Youtube Vimeo